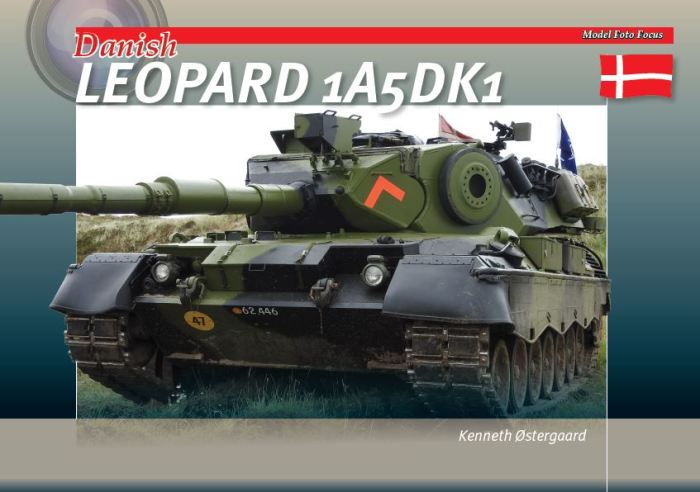 Continuing the growing line of books in the Model Foto Focus Series, Trackpad Publishing recently announced the release of the fourth edition in this series, Danish Leopard 1A5DK1. I was fortunate enough to receive an advance copy of this book from the publisher and would like to share what is contained inside as a few personal thoughts about it. 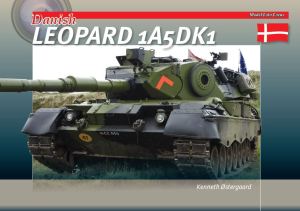 Danish Leopard 1A5DK1 is a one hundred page, soft cover book presented in landscape format and is printed on high quality stock. Kenneth Ostergaard, author of this publication, brings together a rather large collection of personal photographs along with a few archival pictures, compiled with a wealth of information focusing on the Danish Leopard 1A5DK1. It is easy to see after flipping just a couple pages into the book, that this is a highly detailed walk around photo-shoot of this main battle tank. In fact, there are 350 color photographs contained within the book, each of which are supported informatively throughout the pages of this book.

Danish Leopard 1A5DK1 starts off with synopsis of Denmark’s Pansrer Infanteribataljon (Armoured Infantry Battalion) history covering the years just prior to the 1976 introduction of the Leopard tank into the ranks right up to present day. Quickly from the opening, the author dives right into the meat of the subject at hand. In the Introduction, we are shown a detailed early look at the Leopard 1A5DK1 prior to Danish modifications. This section serves as a basis for understanding the roots behind this main battle tank.

Following the Introduction the next eight chapters are a systematic and up close walk around display of the modified Danish Leopard 1A5DK1. The first three chapters, Hull Front, Hull Side Views and Hull Rear are, you guessed it, all about the lower end to this beast. What is noticed first off with all of the walk around chapters is that the author has provided labeling with numbers to the Chapter’s title photograph. This not only points out location to various parts of the tan, it defines these parts for the reader very well. Each page after that in the chapters is a closely photograph view of the parts labeled in the title page giving the reader and even more comprehensive look around the Leopard 1A5DK1.

Segueing nicely, the next two chapters, Powerpack and Running Gear, give the reader a glimpse into what make these beasts move. Again, we are treated to an amazing display of color photographs in these chapters. In the Powerpack chapter we again see the introduction of a number photograph, this time of the exterior of the rear engine deck. This is followed up with an array of pictures defining the various external parts to the rear deck of the tank. We are then shown the engine installed and removed from this Leopard. This allows us a view of how the engine fits inside the tan, a great visual to the engine itself as well as detailed views inside the empty engine compartment. Moving into the Running Gear chapter, the author shows a highly detailed look around the road wheels, return rollers, idlers and sprockets to this Leopard. Included in this section are some fantastic pictures of worn road wheels being replaced with attention paid to the hubs assemblies without the wheels, drive sprockets and idlers in place. 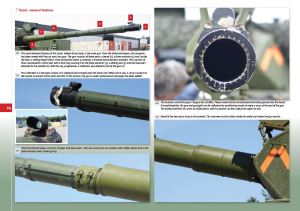 The next two chapters are all about the turret to the Danish Leopard 1A5DK1; Turret – General Features and Turret – Danish Features. Both chapters show a highly detailed walk around view to the Leopard’s turret. The General Features chapter shows the standard configuration to turrets as a whole as seen on both the 1A5DK and 1A5DK1 Leopards. More number photos are provided showing in great detail the main gun to the 1A5DK1 as well as hatches, smoke dischargers and more. The Danish Features Chapter singles out focused views of the white light searchlights, air conditioning units and generators, APU and storage boxes as well as the special holder for the gas cooker and more.

Chapter 9 is all about the Interior to these Leopards. Again, the author has left no stone unturned. Provided in this chapter are photographs from all angles inside the tank. Many of these photos are numbered and descriptions of the numbered parts are supplied in the supporting text. Chapter 10, In the Field, shows these Leopards under normal operating conditions. In this case they are deployed as a UN peacekeeping force both IFOR (Implementation Force) and as SFOR (Stabilization Forces) We see the interaction of the men and machine in live fire practice and patrols along with a fine one-page display of an old Leopard that was regulated to range target duty.

Rounding off the book is the final chapter titled, Attachments and Variations. Using walk around photos of two specific Danish Leopards, we are given a front row seat look at the various attachment used on these tanks. The first section of the chapter gives the reader a great visual to the dozer attachment and mounting used on many Leopards. This is followed closely with an equally in depth look are the Israeli Ramta Track-Width Mine Plough and then a good look at the tank’s waffle…or exhaust grilles which for the most part at the time this tank was modified were single cast units.

Trackpad Publishing surges forward with yet another outstanding edition from their Model Foto Focus Series. Danish Leopard 1A5DK1 is the fourth book in this series and gives the reader one of the most comprehensively detailed walk around views of the Danish Leopard 1A5DK1 to date. The author has excelled in his efforts to show just about every square inch of these tanks as well as nicely complimenting the picture-packed pages of this book with a tremendous amount of informative supporting text defining both major and minor components of these beasts. I can honestly say, the Danish Leopard 1A5DK1 book is a modeler’s dream reference as it pertains to this tank. Kenneth Ostergaard has done an amazing job showing the complete ins and outs to the Danish version of the Leopard tank. Other than being a perfect reference companion for modelers, the book would make a fantastic addition to any Leopard tank enthusiast’s library.

Modelers Social Club and the MSC Review Connect would like to thank Trackpad Publishing for providing us with and early release of Danish Leopard 1A5DK1 for this review!

This site uses Akismet to reduce spam. Learn how your comment data is processed.